Hey all! Although this is The Yum Yum Club’s December 2018 Business Report, I guess I should start by wishing you all a very Happy New Year!! 😁 I do hope you all had a wonderful Festive period wherever you are in the world!

December was only the second complete month for The Yum Yum Club and I’m proud to announce that profits are up 410%!! 🥂

You’ll remember from the November Business Report that since opening its doors The Yum Yum Club had made a loss of £1,042.41. This includes the initial set-up costs. Also, note that this is on a cash basis and not accruals so all cash paid for memberships, e.g. Bluehost, that can be refunded on a pro rata basis, if cancelled, are accounted for as a full 100% charge. Basically, therefore, this loss number is the worst case scenario if I stopped The Yum Yum Club now.

The full December income and expenditure report is as follows:

On the face of it, having a net loss of £1,904.82 is not great but I need to keep this in perspective. This is the end of month 2 only and revenue is increasing.

If you remember last month’s report you’ll know that the key to monetizing any blog is to have a constant and increasing flow of quality traffic to the blog. This will increase add revenue for the new blogger and also support the sale of products and services as they are developed.

So let’s have a look at traffic growth for The Yum Yum Club.

As a quick recap from November, The Yum Yum Club had 404 unique users of which 396 were new compared to the shorter October. These users had 630 separate sessions between them and visited 1,415 pages in total. Looking at the same summary for December 2018 you can see there has been a good increase in traffic for The Yum Yum Club with 1,894 unique users of which 1,847 were new. These users had 2,277 separate sessions between then and visited 3,405 pages in total: This is a 369% increase in users which is great news. However, there are a few things that concern me. First, the number of sessions per user has decreased which means there are fewer people returning for a second look.

Secondly, the number of pages per sessions is down a lot, along with the average sessions time. This suggests people are, possibly, not being grabbed by the content and wanting to continue reading. Having said that, I should just monitor this for now. The first full month had a number of friends and family looking at many pages which may well have distorted this November numbers.

So what has driven this increase in traffic? Where has it come from?

Looking at December only, it’s clear that the bulk of the traffic to The Yum Yum Club, almost 70%, has come from referral traffic compared to other sources: Last month I mentioned focusing on food submission sites like foodgawker and foodyub. This is what is known as referral traffic. The breakdown of the different referrals for December can be seen here: You can see that The Yum Yum Club’s November focus on food submission sites has started to pay off in terms of traffic in December. I have now found 17 food submission sites. However, only 9 of the 17 seem to be actually live, or open to subscription and, from the above, only 2 are having a major contribution to the traffic. Having said that, submitting to these sites is not that time consuming so I will continue submitting to all for a few months more before I decide to filter out those that are not providing any real benefit.

One of the other goals for December was to put some more focus on social media traffic.

Regarding social media various sources exist with the main 4 being:

Although The Yum Yum Club posts to all of these, its initial focus was Pinterest as this seems to be the most recommended avenue for initially growing traffic. Through December I made 3 changes to The Yum Yum Club’s Pinterest approach compared to November:

The results, although early days, speak for themselves. First, social media as a source generally: Then, looking at Pinterest as a specific line item: The key with Pinterest, as I see it, is I just need to continue doing more of the same. That is, keep adding quality posts to The Yum Yum Club, join more tribes, join more groups and continue to regularly post on Pinterest without breaking any spamming rules. If I do this then the Pinterest traffic number for The Yum Yum Club should increase. We’ll see in January…

But what about the other sources of social media traffic?

I will report progress for January early Feb.

On a final note on traffic, I wanted to mention geography i.e. where most of The Yum Yum Club’s traffic comes from by country. For December you can see the breakdown here: You can see that by far the majority of The Yum Yum Club’s traffic comes from America. The question is should this worry me? Well, from a financial perspective this is good because the US pays the highest for advertising compared to all other countries. In fact, when I look at Food Blogs globally, by far the majority are US based and this is where the bulk of blogging generally started.

To that end, I think it is prudent to continue to focus on the US and worry about other countries in the coming months. What this means in practice is that I have started to do the bulk of The Yum Yum Club’s actual site posting in the morning or evening US time. All the prep is done beforehand but I actually operate later in the day UK time.

We’ll see if this makes a difference over time.

6. A couple of other points

This Business Report has focused on traffic and I think this is critical at this stage of my blogging journey. Without traffic, the blog is nowhere. However, there are a couple of other points I wanted to share with you regards December and the goals for January.

In the November Report, I talked about using Google Adsense. In December I also added the Yahoo and Bing equivalent through Media.net. The advertising through Media.net aims to be more specific to the blog itself and also blend into the actual blog surroundings. $1.10 was generated from Media.net in December but it is very early days. I will monitor both of these and continue to search out other Advertising options as the traffic grows.

One other point re advertising is that I have changed most of The Yum Yum Club’s pages to include a Secondary Sidebar. This allows for more advertisements to be shown. I am a little concerned this may affect the look and thus the traffic to the site but at present bounce rates are holding up. Again, I will monitor this over the coming months.

b) Affiliate programs and Amazon

I talked about both of these at length in the November Report but, suffice to say, zero revenue has been generated from these sources to date. Again, I will monitor this over the coming months.

Last time I touched on the need for any blog to have, in addition to advertising, it’s own products to sell. Well, it’s early days for The Yum Yum Club but I have started to regularly post Healthy Smoothies and have a dedicated page for this. Ideally, this would have been all ready for the start of the New Year (the diet season). However, I simply did not have time for this.

The aim here, though, is to get a reasonable number posted. Say, 20+ (I have 4 at the time of writing and the page can be found here) and then write this up as an ebook and use it as a tempter for people to sign up to The Yum Yum Club’s mailing list. Ultimately, I may even break this away and set up as a subscription page or a website its own right. We will see…

OK, that’s it for the December 2018 Business Report. It was a busy month and The Yum Yum Club did generate £5.36 in revenue. Let’s see what January brings… 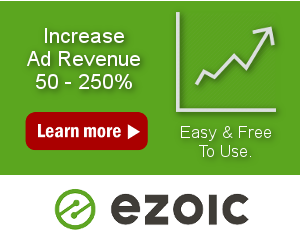